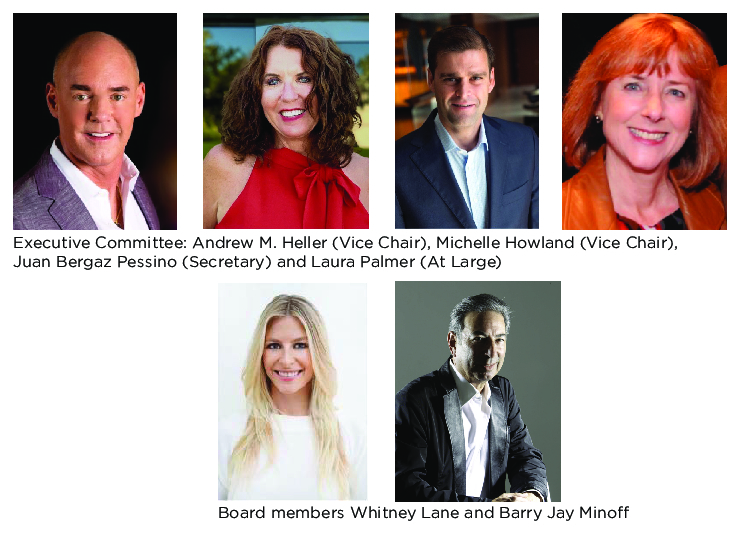 The Board of Governors also named Whitney Lane and Barry Jay Minoff as new members.

“Each of these outstanding leaders has demonstrated a strong commitment to NSU Art Museum’s mission and future,” said Bonnie Clearwater NSU Art Museum director and chief curator. “They will be working closely with me and the Museum’s board and staff to develop new ways to serve the community and engage new audiences and donors.”

Andrew M. Heller (Vice Chair) is the founder of Heller Capital Corporation, which has provided funding for startup companies and acquisitions in manufacturing, financial services, medical technology, real estate development and finance, and natural resource exploration and development. Mr. Heller is also Chairman of Putnam Precision Products, a contract manufacturer of high precision machined components for medical devices and other industries. He was a member of the Board of Overseers of the Wharton School of the University of Pennsylvania and also served as a member of the Wharton Graduate Advisory Board. He was also a former chair of the Wharton Annual Fund and was the chair of the Wharton Global Forum Miami 2017. He is a member of the Board of Directors of the Jack and Jill Children’s Center in Fort Lauderdale.

Michelle Howland (Vice Chair) is a veteran real estate professional specializing in marketing high-end residential and waterfront properties throughout South Florida. Prior to her career in real estate, she spent several years in the technology world selling information systems to Fortune 100 companies. She is the founder of The Howland Group, an elite team of real estate specialists. Ms. Howland serves on the Board of Directors of The Humane Society of Broward County as well as the Board of Directors of PAWS, the auxiliary for the Humane Society and on the Board of Directors for the Broward Performing Arts Center Foundation. She is a current and past board member of Funding Arts Broward. She is also a member and supporter of the United Way of Broward County Alexis de Tocqueville Society.

Juan Bergaz Pessino (Secretary) is a Spanish film and television producer. In 2018, he established the Bergaz Productions Company with offices in Coral Gables, FL and Santa Monica, CA. The company produces high quality films and TV series in partnership with MiLu Entertainment and Hollywood Gang Productions, with a goal of revolutionizing the entertainment industry. Previously, he worked for the Bacardi Company from 2008 until 2018 and is a member of the Bacardi family.

Laura E. Palmer (At Large) is the President of Seitz Inc. Advertising and Promotion. She founded the company in 1990, following a 10-year period during which she effectively spearheaded successful advertising and promotional programs for a variety of clients. Since the early 1980s, she has worked with dozens of South Florida residential and commercial developers on a local and national basis. She also has extensive experience handling the promotion of product manufacturing across a number of industries, professional service companies and government agencies. She previously served as Vice Chair of the Museum’s Board of Governors and is also a member of the Board of Directors of Bonnet House Museum and Gardens.

Barry Jay Minoff (New Board member) is a Hollywood actor and film producer whose films include Looking Glass (2018) with Nicholas Cage. Chairman of his family’s business, Kichler Lighting, since 1997, he grew the Cleveland-based company into the largest manufacturer of decorative lighting. The company was sold to Masco Corporation in 2019. Mr. Minoff’s business awards include being named Ohio entrepreneur of the year in 1996 by Ernst and Young, NASDAQ and USA Today. He currently serves on the board of the Rock and Roll Hall of Fame Museum in Cleveland and Voices For Children Foundation in Miami and is a past chairman of YPO, Northeast Ohio Chapter. He is also an active member of the Broward Sheriff’s Advisory Council. In 2019, Mr. Minoff and his family made a historic gift to University Hospitals in Ohio, which provides medical care to over 100,000 outpatients annually at the University Hospitals Minoff Health Center.

Whitney Lane (New Board member) is a speech and language pathologist in private practice and an active member of the business and philanthropic communities. She is involved with Venture for America, a fellowship program for recent college graduates who want to become start-up leaders and entrepreneurs, and the Multiple Myeloma Research Foundation. She is also an avid art collector. Mrs. Lane has a Master’s degree in Speech and Language Pathology from Columbia University and a Bachelor’s in Psychology from University of Miami.

About NSU Art Museum Fort Lauderdale
Founded in 1958, NSU Art Museum Fort Lauderdale is a premier destination for exhibitions and programs encompassing many facets of civilization’s visual history. Located midway between Miami and Palm Beach in downtown Fort Lauderdale’s arts and entertainment district, the Museum’s 83,000 square-foot building, which opened in 1986, was designed by architect Edward Larrabee Barnes and contains over 25,000 square feet of exhibition space, the 256-seat Horvitz auditorium, a museum store and café. In 2008, the Museum became part of Nova Southeastern University (NSU), one of the largest private research universities in the United States. NSU Art Museum is known for its significant collection of Latin American art, contemporary art with an emphasis on art by Black, Latinx and women artists, African art that spans the 19th to the 21st-century, as well as works by American artist William Glackens, and the European Cobra group of artists. Two scholarly research centers complement the collections: The Dr. Stanley and Pearl Goodman Latin American Art Study Center and the William J. Glackens Study Center.